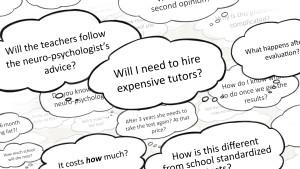 The first time I heard of an IQ test for children was in grade school. A newspaper article said the actress Geena Davis had such a high one and that she was in Mensa. It’s interesting that these tests are often talked about in the context of trivia, or as a friend recently said, in a hushed tone of secrecy.

When it comes to understanding how one’s own child learns, however, these tests can be essential, practical, and also confusing.

An IQ test identifies how a child processes information, both verbally and non-verbally. Learning in the classroom depends on how well the child understands the teacher’s words. A child also needs to respond to words, shapes and symbols. By identifying specific areas of weakness, teachers can make accommodations.

When might a parent be told that his or her child should take an IQ test?

Parents might be told that their child should have an IQ test when the teacher recognizes that the child is struggling in a particular subject. Sometimes, this occurs as early as preschool. The child’s teacher might have concerns about the child’s readiness for a kindergarten program.

Sometimes it happens at the end of first grade when the teacher sees that the child is not acquiring reading skills as quickly as  classmates.

In third or fourth grade, when the volume and complexity of work increases, some children who were able to mask learning problems begin to struggle.

In sixth grade, previously high achieving students might have difficulty with the transition to a middle school environment. It could be because of the change of classes, the volume of the work, or the presence of some previously undetected learning difference.

In high school, the major reason for a referral for an IQ test for children would involve admission to a private school. Finally, in junior year, re-evaluations are required for continued accommodations on tests including extended time for SATs.

Nancy Weinstein adds: Keep in mind that a school psychologist is most likely to recommend a psycho-educational evaluation.This includes an IQ test in combination with achievement tests. It also might include test that measure very specific areas of concern, such as auditory processing.

One colleague, a mother of two, looked at this issue from the parent’s point of view: When or why might a parent think her child may need an IQ test?

When your child is having difficulty reading or with basic math, it is a red flag. Most parents recognize there is a problem. Parents generally don’t know an IQ test for children is necessary. However, most are generally aware that there is some sort of testing that will require the school to provide services and help.

My daughter started a new school in second grade. The teacher called me after the second week of school to tell me that she was recommending my daughter for testing. She was not tested until the spring of that academic year, and I did not get the results until June.

I have a son who has always performed above grade level in school and has been in gifted programs. It never occurred to me to have him take an IQ test to identify his strengths.

After the test, what next? How are the results related to a course of action or approach in terms of the education of the child by the school, parents, and individual child?

For this, we hear from a colleague who teaches at an independent school.

Teacher: As a teacher at a school for students with learning differences, I read many professional reports of IQ tests. When the report is shared with the school, the homeroom teacher reads it thoroughly and creates an in-house summary. That document can be read by the other teachers that work with that child. It includes the child’s strengths and weaknesses, along with the recommendations and plan for that child based on his or her needs.

What are the pitfalls of an IQ test for children?

Dr. Matthews: Not recognizing that it is simply a human-invented construct. It does not test everything about a child that makes him special, unique, and worthy.

Parent: I do think there are many factors that affect a child’s performance on an IQ test. For example, sleep, hunger and mood are important. My child was tested three times and the results varied in some areas.

Teacher: The timed sections on the test do not count answers that are correct if they are not answered in the time provided. This drastically reduces some students’ overall scores. Students with learning differences might not do well on these tests. Therefore, many times it will say right in the beginning of the report that there is not a high level of confidence in the scores because of a student’s processing speed or other weakness. In some cases, students in a public school cannot qualify for special education if the district is going by the discrepancy model between ability and achievement.

Nancy Weinstein adds: I’d hope parents understand that today’s IQ test for children is not the same as when we were in school. It is not a label that you live with. It’s important that parents take IQ tests for what they are now intended to be, a roadmap of how your child thinks. Teachers and parents can use the results to support a struggling student.

By the way, research now shows that IQ does change. You’re unlikely to see dramatic fluctuations but most children will show changes over time. Perhaps the best thing we could do is keep the test but change the name.

This blog was written by Sarah Vander Schaaff, staff writer for Mindprint.

Do you have experience with IQ tests for children? We’d like to hear from you.

Thank you for reading.